I had a modified desk with a three tonne hydraulic automotive jack under it for a while which made one thing clear. You have to be able to adjust the height very easily, with little fuss, or you wont adjust as often as you would like. To that end, a motorised desk was clearly the order of the day.

After playing around with some electric car jacks as a lift mechanism, and a rocky frame that didn’t travel smoothly, I finally said, “screw it,” to the DIY project and ordered a QDOS desk frame.

Here’s the end result, my new desk, currently set at standing height. (Click on any image to see a larger version.) 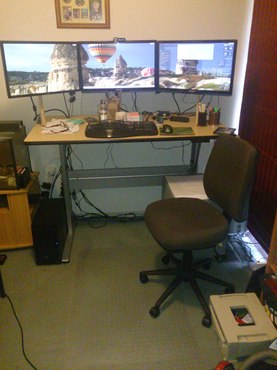 I reused the desktop from my old desk, although it was quite wide so I cut it down a bit so it could sit closer to the wall. I also wanted some nicer monitor stands as I was tired of plastic boxes and phone books, and wanted all the monitors at the same height.

I like my monitors sitting quite high above the desk, and pretty much vertical, not tilted back, which became a problem as I found most suitable monitor stands were not tall enough unless I was going to buy one that would mount two monitors vertically. So instead I bought some wall mount brackets and then wandered down to the local hardware store to figure out how I was going to use them. This is what I came up with in the end: 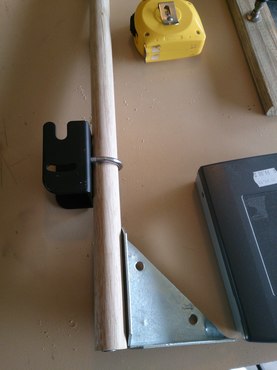 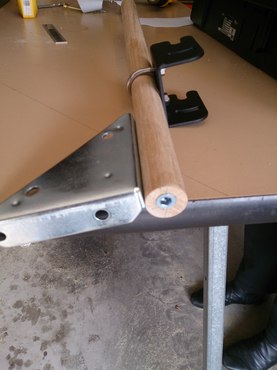 A bolt is run though the desk from underneath, screwing into the bottom of the shaft. An angle bracket provides additional stability. Placement was a very fiddly process as you don’t want to go drilling holes in your desk in the wrong spot, but it turned out alright in the end. 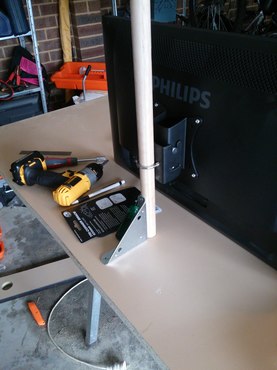 Pulling the old desk out also provided an opportunity for a good clean-up, and I think you could agree the final result is a lot neater than before. 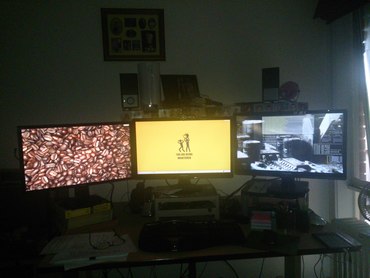 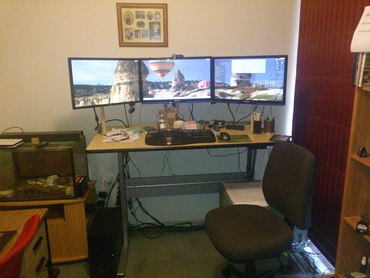