My Life With Pets — Tag Teamed

If Pavlov used a Labrador I think his experiments are void.

Well the cats are still at it. Last night Michelle was dishing up dinner and turned her back for a second and one of the cats nipped up onto the bench and tried to take off with a chicken drumstick.

It turned out to be a bit too heavy and while trying to dodge various objects being thrown at him he dropped it onto the floor, where of course Toby instantly vacuumed it up. (Toby is actually very well behaved – we’ve left food out on the coffee table and he knows not to touch it – but once it hits the floor it’s his domain.) 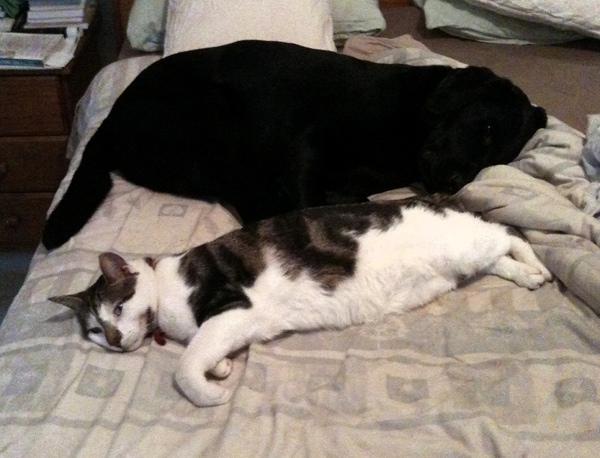 For the non-dog owners out there, cooked chicken bones are generally not very good for dogs. They can splinter and cause problems, so when you see your dog gobble down a drumstick you react with some urgency.

I immediately stuck my hand down his throat to try and retrieve the drumstick – which has left me with a very nice imprint of one of his molars on the side of my finger and taught the children a few new expressions they’re not allowed to repeat.

Thus, with one hand covered in slimy dog spit, and the other holding on to his collar, I took the last action left to me and hoicked up on his collar so he couldn’t swallow. We danced that way for a little bit until he finally dropped the bone.

At this point all pets were encouraged into the laundry either by the scruff of their necks or pure inertia and locked away until after dinner.

It was actually quite nice to eat a meal without having furry eyes watching your every move for a change.