My Life With Pets — Labrador Retriever (noun): A Stomach On Four Legs

“Outside of a dog, a book is a man’s best friend.
Inside a dog, it’s too dark to read.”
— Groucho Marx

We have a three year old Labrador named Tobius or “Toby” for short. He was supposedly the runt of the litter, but turned out to be a big black doofus with an attention span about as wide as the space between his eyeballs. 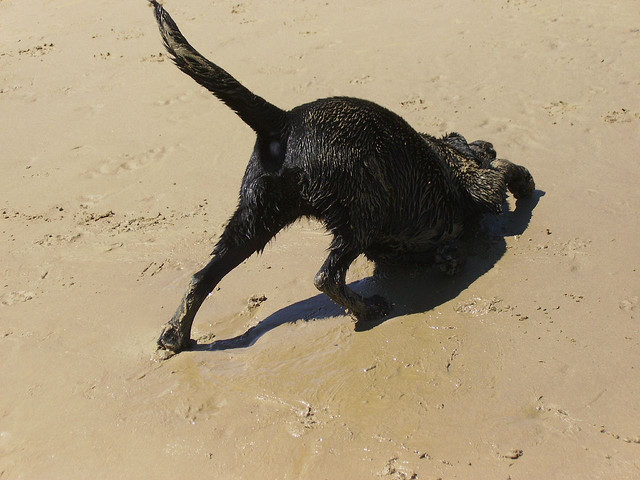 He is not especially good at playing fetch. He'll be running along after the ball and something will divert his attention --- one sharp left later he's off rolling in God knows what and you're the one fetching the ball. About the only time he's any good at fetch is if we play it in the house, up and down the hallway.

So of course, Toby swallowed a ball a few weeks ago. It was one of those small rubber super-balls that I’m continuously telling my daughter not to play with or the dog will eat it which, sure enough, is what happened. She was bouncing it up and down the hall, there was a flash of black and a scream of, “No Toby!” and the ball was breakfast.

The advice from the vet was to wait and see, and to check his poop for the next few days to see if the ball appears (a task that was delegated to my daughter for obvious reasons – that and because it was her fault he ate the ball in the first place). If it didn’t turn up in a few days or he showed signs of distress then call them back.

Luckily he threw up the ball sometime during the second night as we found it in the laundry the next morning. None of the animals have been inclined to play with it for some reason.

Being the first dog I’ve ever had, he has certainly been a learning experience for me. The general failure with the whole fetch thing for one. Toby has had surgery twice on his left eye to laser out a growth, so perhaps his vision isn’t all it could be and he has trouble tracking the ball. He’s certainly not always the most visually observant.

At the start of June I had my head shaved for a good cause. Shaggy hair and beard completely gone, run over twice with a straight razor, the whole nine yards. After which we went bowling — but I digress. When we got home, with the excitement of everyone arriving and pats and such he just didn’t notice, but a while later, after I have been sitting at the computer for 20 minutes or so then got up and turned around he totally freaked. He jumped up and barked, “Who the hell are YOU?!” His nose and eyes were telling him two different things.

Fortunately he calmed down quickly once I gave him a cuddle and distracted him with a cat to chase.