My Life With Pets — Cats, Birds and Bibs 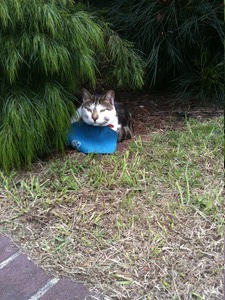 One of our cats has a bib-like cloth attached to his collar these days to stop him catching birds. It is suppose to interfere with his stalking and so far it's worked.

The other cats in the neighbourhood do point at him and laugh and call him a kitteh [sic], but he’s reaped his own reward as far as I’m concerned as he kept bringing birds home and hiding them in the house…

Anyway, just now a nice old man knocked on my door because he saw Kismet with this thing on his collar and was concerned it was something stuck in his collar and might be choking him.

I explained what it was and assured the man that if anybody was going to have the pleasure of throttling that bloody cat it would be me and not some inanimate piece of cloth.