My Life With Pets — Bedtime Blitz

“A cat by any other name is still a scheming little fur ball that craps behind the couch.”
— Unknown

The two new cats we’ve got are incorrigible. Despite our best efforts to date they will still go on the kitchen benches whenever they can get away with it. Every other cat we’ve had we’ve been able to train to stay off the benches, but not these two.

They will also steal any food that is left unattended for even twenty seconds. The little buggers have gotten into meat that was left out to defrost (in the sink with a heavy glass breadboard over the top to keep them away, mind you) and even steal bread left out on the bench.

They will literally try to steal food off the kids plates while they are eating their dinners if adults are not around.

Ever since Michelle and I got our first cat the day after we got back from our honeymoon, we’ve maintained the habit that the animals get shut in the laundry at bed time and let out again in the morning. They’ve got baskets, water and other amenities to make it comfy. They soon get use to it and it becomes part of the routine. These days, with two cats (Kismet and Bazyl) and a hulking black Labrador (Toby), it’s the only way to get a peaceful nights sleep without something four legged tearing over you in the middle of the night. 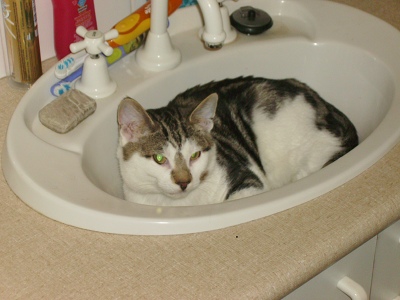 Kismet, however, has gotten into the habit, when it comes that time of night to put them into the laundry, to sneak under the table and only be lured out by food --- which grates because if I give in a put some food down I feel like I'm rewarding him for being a sneaky prick. And he is sneaky too, because he can be fast asleep in my daughter's room, but will hear me let Toby out the backyard for his pre-bedtime ablutions. So while doing this I see him slink out of her room and under the table were I can't get him.

Then last night absolutely tore it. I’d done the trick of looking like I was getting food out of and panty, and when he runs into the laundry I’m was empty handed one too many times, and he wasn’t buying it, even when I actually put food down. I would chase him out from under the dining table, and he would run up the other end of the house and hide under the couch. I would chase him out from under there and he would move on to the next bit of cover, ducking and weaving commando style until he makes it back to the dining table, and around we’d go again. The very last thing you want late at night before heading to bed is to be playing a game of tiggy with a damn cat.

Let’s just say that as 12:30 last night the house was neat and by 12:40 half of the furniture had been upended so the cat couldn’t get under it, the little bugger had finally been cornered behind my bed, carried by the scruff of the neck and given a lesson in aerodynamics as he was jettisoned into the laundry.

Since that night, we’ve come to a certain understanding. I invested in a water pistol, you see, and so now it usually takes no more than two circuits around the house before he declares defeat and slinks damply into the laundry, while the other pets try not to giggle too conspicuously.

The cats' continued and brazen brattishness led me to research these electric fence type things where they wear a collar that gives them a jolt if they get too close to the proximity sensor. This would be ideal to set put the sensor in the kitchen to just keep them out of there, but there are two problems:

Ah well. For now, the war of attrition will continue unabated.