Do you have a cat named Murray?

Growing up, I was a fan of the Footrot Flats comic strip written by Murray Ball. It detailed the toils and tribulations of “The Dog”, Wal, Cooch, and a menagerie of animals on a farm in New Zealand. One of the clan was a cat called “Horse."

Horse was this super-tough cat that hung around the farm and would basically beat up anything that got in his way.

Well, I’ll do you one better than Horse, I have, “Murray.”

Murray, who picked us out at the animal shelter and said, “You’re taking me home now.”

Murray, the most vocal cat I know, who has a meow that sounds like the devil being strangled. Seriously. I’ve seen adults be completely freaked out when Murray walks in the room and says hello.

Murray, who would go psycho at this big white cat that would come around at night when our cats where locked in and hang outside the window going, “Narr, Narr.”

Murray who always liked to sit on your chest all night and purr. 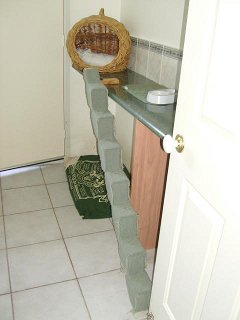 Murray who gave me the cat flu.

Murray, who had a very smug look on his face one night when we got home really late one dark night.

Murray, who when we let him back out again the next morning, proudly showed us all this white fur from one side of the house, right through the garden beds and into the car port. We never saw that white cat again.

Murray who wandered out the pet door one windy night, and disappeared. We thought he was gone for good, only to get a phone call ten months later to the day from someone in Endeavour Hills who had found him and had been feeding him.

Murray, who I made a set of stairs for because he couldn’t jump up to the shelf in the laundry where his food and water and respite from the dog lay.

Murray who at age seventeen again wandered out the pet door about six months ago. Tonight I got a phone call from someone in Hallam, asking, “Do you have a cat named Murray?”

Murray who we had to chase around and around a caravan, and when I finally did get my hands on him he piddled all over me.

Welcome home you magnificent beast. I can’t wait to introduce you to the kittens…